Well everyone, I’m back and both baby and my wife are doing excellent! 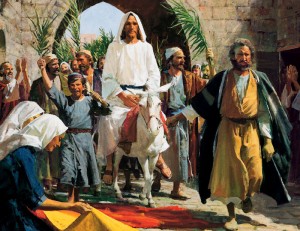 I thought that for this week we would look through the final events of Jesus’ life as we observe Holy Week. However, I am starting this a day late so we will be taking a look at the events of both Palm Sunday and Monday.

“Rejoice greatly, O daughter of Zion!
Shout in triumph, O daughter of Jerusalem!
Behold, your king is coming to you:
He is just and endowed with salvation,
Humble, and mounted on a donkey,
Even on a colt, the foal of a donkey.”
–Zechariah 9:9, NASB

After these events, Jesus went into the temple in order to have a look at the environment. However he soon left to go back to Bethany, which was were he and the disciples stayed during this final week of Jesus’ life.

After 3 years of ministry, today is the day that Jesus makes his final push for the people to come to realize the truth about God and His Kingdom. When he entered the temple, undoubtedly to teach, he saw a sight that he absolutely despised. He saw people, inside the temple, selling animals and other sorts of merchandise, and people who were taking peoples money either with taxes or exchanging currency. Jesus tells the people, quoting Jeremiah, “It is written, ‘My house shall be called a house of prayer’; but you are making it a robber’s den.” (Matthew 21:13, NASB). He then drove them out with a whip of chords he made, and by turning over their tables.

Both of these days were also filled with teaching and healing. I think it’s nice to see the events of Jesus’ life as his time on earth came to an end. Join me tomorrow as we continue onwards.