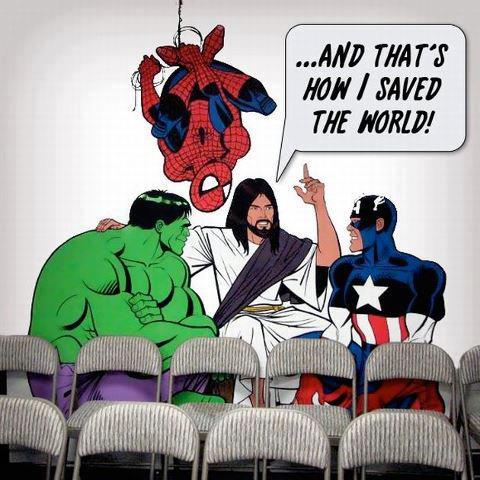 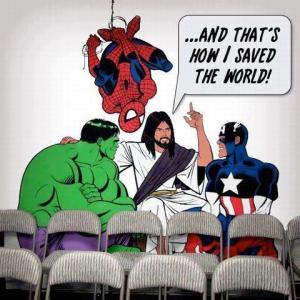 Let me start by saying that I know I’ve used today’s image before, but I like it, ok?!

During his time here on earth, Jesus did many wonderful and great things. He healed many, cured blindness and disease, and changed the world with his teachings. He did all these things by faith and because he was God. But look at what he says in John’s gospel, “Truly, truly, I say to you, he who believes in Me, the works that I do, he will do also; and greater works that these he will do; because I go to the Father.” (John 14:12 NASB).

This says to me that since I have Christ, I can be like a superhero! No, we probably can’t do supernatural things or perform superhuman feats, but God can! He can use us to fulfill His purposes and achieve His goals. There is a couple that goes to my church that had a family member go to the hospital. Come to find out he had a blown an aneurysm, and was all but dead when they reached the hospital. Despite the grim situation, this couple began to pray and placed him on as many prayer chains they could. That was over a year ago! Today he is walking and talking and going through physical therapy to regain motor skills. Doctors, nurses, and unbelieving family members have been shocked at this man’s recovery from such a devastating injury. It’s amazing to think that all of those who prayed for this man have been involved in a miracle. Let’s see Superman bring someone back from death.

The radio segment that inspired this post leaves you with a simple question. Do you want to be in Christ and be greater than Superman, or be without Christ and be no more than a powerless Clark Kent?